Cairo
77; Capital of Egypt and a major port just south of the Nile Delta in the northeast corner of Africa

caitiff
308; someone who is cowardly or despicable

Camaroon
267; Republic located in west-central Africa. Under British and French control from WWI until 1960.

Cape Town
241; capital of Union of South Africa and located on the southernmost tip of Africa

carabinieri
205; a member of the Italian national police force

catechumen
123; one receiving instruction in the basic doctrines of Christianity before becoming a full member of the church

Cellini, Benvenuto (1500-71)
159; Florentine goldsmith and sculptor expelled from Florence for dueling. Returned to Florence later in life and worked under patronage of Cosimo I de'Medici

C'est Magnifique
438/486; 1953 popular song written by Cole Porter for his musical Can-Can; played by hot-jazz band in Metro, in Valletta

Cinderella liberty
???/487; in the Navy, a liberty (shore leave) that ends at midnight of a given day


"[the Church] formed along with uncle Evelyn the foci of her serene orbit" 72; "three jailbait [...] stood in front of the wheel of Fortune" 139; "[Chiclitz] and Eigenvalue were part of the same Circle." 152; "He belonged to that inner circle of deracinated seers" 160; "I wanted to stand in the dead center of the carousel" 205; "Foppl's own planetarium, a circular room with a great wooden sun" 239; "our Vheissus are no longer our own, or even confined to a circle of friends" 248; "as if Stencil's notion of an inner circle were correct after all" 297; "Fortune's wheel [...] the hub still held the spokes in place and the meeting place of the spokes still defined the hub" 338; "the children's wheel was dead-level, its own rim only that of the sea's horizon" 338-39; "a radius along with leather-winged Lucifer" 339; "an inner circle of enlisted men" 373; Sirius' "halo of plague, which is nine light-years from rim to center" 393-94; "the invisible circle centered at Xaghriet Mewwija with Lampedusa on the rim" 462; "Malta as a charmed circle, some stable domain of peace" 480; "if only to complete a circle begun in England eighteen years ago" 489; "Draw a line from Malta to Lampedusa. Call it a radius. Somewhere in that circle [...]" 492; See also center; clock 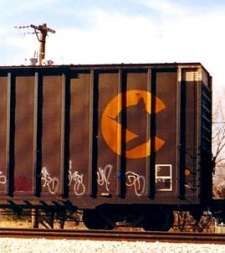 375; a cargo compartment from the Chesapeake & Ohio railroad; can be seen all over the central East Coast. "Chessie," a sleeping kitten illustrating a magazine ad in 1933, was adopted by the C&O as a mascot. Various graphics featured Chessie, eventually leading to the stylized silhouette over a capital C sometimes seen today.

cognates
465; In the context of V., Spanish words that mean the same thing, or have the same derivation

Colonna, Pompeo
464; of the famous Roman family which included a pope (Martin V), several cardinals, generals, statesmen and noted scholars; sent by the Pope with 1200 men to relieve La Valette

Colonel Bogie
325; Colonel Bogey was the fictitious eponym of the "Colonel Bogey March," composed by F. J. Ricketts (as Kenneth J. Alford) in 1914. The tune is featured in the score of the 1957 film The Bridge on the River Kwai.

complexity/chaos
The Situation as, 189; "Any minor accident: a break in the clouds, a castastrophic shivering at the first tentative blow to a shop window, the topology of an object of destruction (up a hill or down--it makes a difference)- anything might swell a merely mischievous humor to suddenly apocalyptic rage." 477; "Who knows how many thousand accidents--a variation in the weather, the availability of a ship, the failure of a crop--brought all these people, with their separate dreams and worries, here to this island and arranged them into this alignment? Any Situation takes shape from events much lower than the merely human." 483; Education of Henry Adams

Constantinople
462; Originally called Byzantium (c.660 BC - 330 AD), and since 1930 Istanbul, Constantinople was founded by Constantine I in AD 330, becoming the new capital of the Turkish Empire. Now the capital of Turkey, it is located on a thin strip of land (the Golden Horn) between the Black Sea and the Sea of Marmara.

Convoy Escort Piers
375; in Norfolk, VA, where Scaffold is docked; 376

Coptic
84; relating to a people who descended from the ancient Egyptians

cormorant
248, 320; any of a family of dark waterbirds with a long neck, hooked bill, and neck pouch; by extension, gluttonous or greedy

corsair
462; a pirate, esp. a privateer of the Barbary Coast

corvette
304; highly maneuverable armed escort ship that is smaller than a destroyer


"I like to see young people get together." 31; "a ready acceptance of miracles or visions," 200; "they seemed to give up external plans, theories and codes [...] to indulge in being simply and purely young," 201; "Inanimate money was to get animate warmth," 214; "life's single lesson: that there is more accident to it than a man can ever admit to in a lifetime and still stay sane." 321; "We cannot expect more of the bombs than of the wind." 322; "It is a universal sin among the false-animate and unimaginative to refuse to let well enough alone. Their compulsion to gather together [...] extends on past the threshold of sleep;" 323; "horror of isolation," 324; "no conscious plot/Drove us underground" 326; "accumulation of small accidents" 330; "towards peace and simplicity" as opposed to "exhausted intellectual searching" 309; "once the inadequacy of optimism is borne in on him by an inevitably hostile world, to retreat into abstractions" 310; See also paranoia


459; a peninsula in the extreme southern Soviet Russia, bordered by the Black Sea to the east, south and west. The Crimean War (1853-56) was Russia against Turkey, Britain and France. Russia was defeated and Turkey's independence thus guaranteed. (The Charge of the Light Brigade and the nursing of Florence Nightingale occurred during this war.)

Crockett, Davy (1786-1836)
219-20; American frontiersman and statesman; died fighting for Texas' independence from Mexico at the Alamo

Cunard
189; shipping line between Britain and America began in 1839

curvet
262; when a horse makes a prancing leap such that for an instant all its legs are in the air