Please keep these annotations SPOILER-FREE by not revealing information from later pages in the novel.

157/166 - . . .author of The Renaissance
Walter Pater. Young Godolphin (Godot + Dolphin?) is among a literary elite, clearly evinced by his love of obscure in-jokes.

159/168 - Mazzini
19th century politician & Italian nationalist who was instrumental in the creation of modern Italy from divided monarchies & states.


Mantissa = Latin: "makeweight": something thrown onto a scale to bring the weight to a desired value; In mathematics: the decimal part of a logarithm; Wikipedia 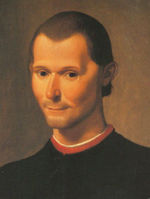 
In a famous letter to his friend Francesco Vettori, Machiavelli described how he spent his days in exile:

When evening comes, I return home [from work and from the local tavern] and go to my study. On the threshold I strip naked, taking off my muddy, sweaty workday clothes, and put on the robes of court and palace, and in this graver dress I enter the courts of the ancients and am welcomed by them, and there I taste the food that alone is mine, and for which I was born. And there I make bold to speak to them and ask the motives of their actions, and they, in their humanity reply to me. And for the space of four hours I forget the world, remember no vexation, fear poverty no more, tremble no more at death; I pass indeed into their world.

His had always been a vigorous, Italian sort of pessimism: like Machiavelli, he allowed the forces of virtù and fortuna to be about 50/50; but the equations now introduced a random factor which pushed the odds to some unutterable and indeterminate ratio which he found himself afraid to calculate. [1]

"Minghe" stands for "minchia" (a very common expression, like the American "shit" — and quite vulgar). "Minghe" is how "minchia" is spelled (pronounced) by southern Italians. "Minchia" means "dick", so "minghe morte" means "your dick is dead" (i.e, "impotent"), and "capo di minghe" means "dickhead", "dick-headed" &c. "Minghe" by itself would be like saying "shit" or any sort of profane exclamation."

"Minghe morte," said Duke. "I figured we were playing it a little slow," Krinkles said.

Also, Mingeborough is where the kids live in Pynchon's short story The Secret Integration. 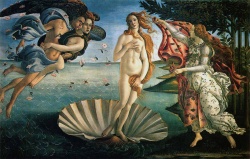 
The Botticelli referenced earlier, famously depicting the goddess Venus arising in full womanhood from the sea.

167/178 - Mahdists
Islamic followers of Muhammed Ahmad, or "Al-Mahdi", a late 19th century religious & theocratic leader in Sudan. Ahmad organized local tribes in an attempt to create an Islamic state in Sudan, & eventually the world. The British organized an opposition & eventually crushed the movement at the battle of Omdurman in 1898.

167 - an outward and visible sign of an inward and spiritual grace
In the Lutheran and Anglican catechisms, a definition of sacramentum, something sacred.

171/183 - Khartoum
Site of an 1884-1885 seige, in which rebeling Mahdists surrounded the colonial forces of General Gordon. When relief forces arrived, Gordon was defeated and his head displayed on a pike.

171/183 - General Gordon
Charles George Gordan, veteran of British campaigns in China and Africa, and governor general of Sudan from 1874 to his death in 1885 at the hands of Mahdist insurrectionists.

175/187 - caviliere
Italian: a knight, although the conotation here may be a "Knight of Labor," an important political or economic figure in a territory.

176/188 - Garibaldi
Giuseppe Garibaldi, revolutionary leader of forces for Italian unification in the 19th century - an Italian insurrectionist hero. Earlier in his life, Garibaldi lived in Uruguay and fought against conservative forces in the civil war there. He was famous for his gaucho costume & red shirt that became a symbol for the unification movement in Italy. Some connection, here, with the Argentine gaucho?

"There was a two-handed, bilingual morra game on over by the icebox. Saul had filled several paper bags with water and was sitting on the fire escape, dropping them on passersby in the street. A fat government girl in a Bennington sweatshirt, recently engaged to an ensign attached to the Forrestal, came charging into the kitchen, head lowered, and butted Slab in the stomach. Figuring this was as good an excuse for a fight as any, Slab's buddies piled in. The morra players were nose-to-nose, screaming trois, sette at the top of their lungs."

While there are many variations, most forms of morra can be played with two, three or more players. In the most popular version of Morra both players throw out a single hand each showing one or two fingers, and call out loud their guess at what the sum of all fingers shown will be. If one player guesses the sum, that play earns one point. The first player to reach three points wins the game. 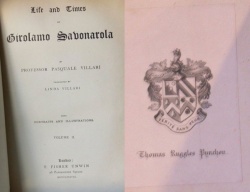 
Girolamo Savonarola was a precursor to the Christian Right, preaching a return to traditional values and railing against the humanism of the Medicis who had brought unprecedented prosperity to Florence as well as a different type of artistic sensitivity, a strong scientific impulse and a rediscovered dialogue with the classical world. Savonarola gained a wide following in Florence (his followers were derisively called "the Weepers" because of their penitential practices and professions), but he was hanged and burned after being convicted of falsely claiming visions, religious error and sedition.

In 2012, The Life and Times of Girolamo Savonarola by Professor Pasquale Villari, published in 1888, was offered on eBay WITH a "Thomas Ruggles Pynchon" bookplate! This may have been a source for Pynchon and in his library OR in his father's library (also TRP), although the former is more likely.