The War of the Quadruple Alliance was a minor European war fought between 1718 and 1720, mostly in Italy, between Spain on the one side, and the Quadruple Alliance of Austria, France, Great Britain, and the United Provinces. The Alliance between Austria, Britain, the Dutch Republic, and France, was formed to prevent Spain from altering the terms of the Peace of Utrecht (1713). When Philip V of Spain seized Sardinia and Sicily, the British fleet brought Austrian troops to Sicily and the French occupied northern Spain, and Philip was forced to renounce his claims in Italy. Wikipedia

Ferrante's "parable" expresses his contempt for the British in Italy, leveraging their "saving" Italy from the Spanish and holding it over the Italians. 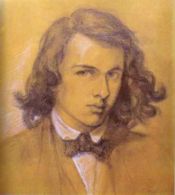 
84; in Cairo; Can't turn anything up on a "Quarter Rossetti" in Cairo, in Baedeker's or anywhere else, so this might be a fictional quarter of Cairo named after the English painter and poet Dante Gabriel Rossetti (1828-1882) who, although he was a founder of the Pre-Raphaelite Brotherhood, from the late 1850s until the mid-1860s his themes in both painting and poetry were drawn more from Dante and the Arthurian legends. After that his work centered on the portrayal of an unattainable and indifferent idealized woman to whom he attributed qualities of mystic sensibility and carnal sensuality (shades of V.). His paintings often dealt with "the 'ideal woman' who, like Beatrice, the poet Dante’s beloved, is a complex symbol of the fusion of body and spirit, of the soul’s pilgrimage to God, of perfect love, of the soul itself. She exists suspended in time." [1] Rossetti greatly admired and was fascinated with Botticelli's Birth of Venus as well as with the Venus myth, which makes the V. connection here strong. And "Rossetti" namechecks with "Rosetta", a harbor north of Alexandria where the famous Rosetta Stone was discovered in 1799.

Through engravings, Rossetti knew Botticelli’s Birth of Venus, in which she stands in the incoming sea on a scalloped sea shell. His gold basin, a reference to Botticelli’s shell, is consistent with his admiration of Botticelli as one of the “pre-Raphael” painters for whom the 1848 Brotherhood named itself. Rossetti calls the attendants “Loves,” meaning Cupid(s), the winged god who was part of Venus’ retinue. They offer her precious gifts and await her music-like voice. 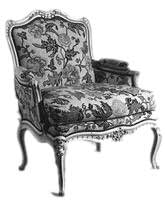 
491; chair; "Louis Quinze" is a term used to describe the style of architecture, interior decoration, and furniture which characterized the period of Louis XV of France (1723-1774), marked by the culmination of the rococo as expressed in flowing lines, rounded forms, and gracefully shell, flower, and other ornaments. [1]