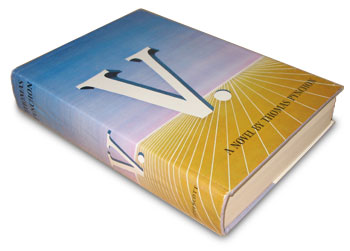 This is the Wiki for Thomas Pynchon's V.. Besides using the Alphabetical Index and the page-by-page annotation, you can also take a look at V. covers, read the reviews, or provide insights or observations.

How to Use this Wiki

There are two major ways to use this wiki. The first is the V. Alphabetical Index, used to keep track of the myriad characters, real and imagined, as well as events, arcana, and lots of other stuff. The second is the Spoiler-Free Annotations by Page, which allows the reader to look up and contribute allusions and references while reading the book, in a convenient and spoiler-free manner. These two sections are so far almost entirely different, but we're working on integrating them.

Apart from those, it's up to you.

Information on the characters, events, and everything else in V., organized alphabetically:
A·B·C·D·E·F·G·H·I·J·K·L·M·N·O·P·Q·R·S·T·U·V·W·XYZ TOP↑

An alternate form of commentary on the text. The guiding principle of these annotations is to remain spoiler-free, so that readers can follow along without the fear that later parts of the book will be revealed.

Click here for help with editing and creating pages.

We have a few conventions we ask that you follow:

The Modern Word: V.
The Fictional Woods - a Pynchon forum

Pynchon's Malta — This is a wonderful article by David J. Alworth, published in Post45. Excerpt:

Here, site reading takes the form of an extended analysis of chapter 11 of Pynchon's novel, which, set in a ruined Malta, narrates the death of The Bad Priest, one of the many embodiments of V. in the story. A humanoid figure trapped at a bombsite, The Priest recalls the mannequins of "Operation Cue," while functioning most emphatically, I will argue, as a riposte to Norbert Wiener and the vision of the cybernetic being that he develops in The Human Use of Human Beings, a text Pynchon knew well.

This article from the June 25, 2008 New York Times Travel section has a video of Malta's history, photographs, and is a pretty good read (but check out the comments!):

Malta’s historical significance, however, outweighs its tiny weirdness. For 2,000 years, it was one of the most important strategic locations in the Mediterranean, a key to controlling naval traffic between the sea’s east and west. More recently, Malta has occupied a strategic spot in the American imagination, from The Maltese Falcon to Thomas Pynchon’s V. and Joseph Heller’s Catch-22, both of which had significant scenes set here. And Hollywood has gotten into Malta, too: Troy, Gladiator and even Popeye were shot here.

Below are some of the images you will find on Pynchon Wiki.

Thanks, and enjoy...
Retrieved from "https://v.pynchonwiki.com/wiki/index.php?title=Main_Page&oldid=961"