Thelma Schoonmaker is an Oscar-winning film editor who has edited every Martin Scorcese film since Raging Bull. She graduated from Cornell with an A.B. (Artium Baccalaureus, aka bachelor's degree) in 1961. Pynchon graduated from Cornell with an A.B. in 1959. They both studied with Nabokov. Interesting that Dr. Shale Schoenmaker (German: "Beauty Maker") in V. edits noses, and Ms Schoonmaker edits film, both improving visuals. But according to her Internet Movie Database (IMDB) bio, Ms Schoonmaker didn't start film editing until 1966, with the film Finnegan's Wake.

The following is an article on Ms Schoonmaker that appeared in 2007:

Cut! The woman behind the throne and in the cutting room 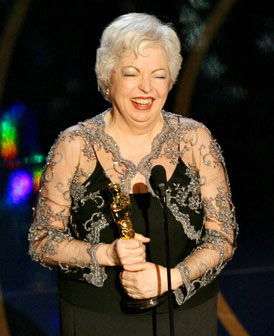 "It" was the Oscar statuette she had won earlier that week for best film editing, for The Departed. Schoonmaker, 67, was sitting in her editing room at Martin Scorsese's production company. She has edited every Scorsese feature since Raging Bull, in the process becoming one of the most respected figures in American film.

Jay Cocks, who collaborated on the screenplays for Scorsese's The Age of Innocence and Gangs of New York, likens Schoonmaker to a giant of jurisprudence.

"Basically, editing is not only the great finishing room, it's the court of last appeal," he said in a telephone interview from New York. "And you've got Justice Brandeis when you've got Thelma."

"What she's really very good at is compressing enormous amounts of material into a very flowing narrative, which is hard," said Alan Heim in a telephone interview from Los Angeles. Heim, himself an editing Oscar winner for All That Jazz, is president of the American Cinema Editors.

Thelma Schoonmaker, winner for Best Film Editing in The Departed, gives her acceptance speech at the 79th Academy Awards in Hollywood, California.

"A lot of Marty's work is improvisation with the actors. I've worked with that kind of thing, and it's really tough. Every take changes. It's so time-consuming, it's almost lapidary. She's just a master of that."

The fact that this was Schoonmaker's third Oscar (the other two being for Raging Bull and The Aviator) might have contributed to her willingness to share her trophy. Or it could have been lingering shock — she had thought Babel would win. Mostly, it was Schoonmaker's characteristic warmth and generosity.

You can hear her personality in her laugh. Richly musical, it's two parts girlish to one part throaty. It's a laugh that could make Jake LaMotta give up his boxing gloves or the cast of Goodfellas hew the straight and narrow.

Shore, who composed the score for The Departed, The Aviator, and Gangs of New York, added, "If anyone's in a position to complain about a film editor, it's me, the composer. I'm not complaining. One of the best film experiences you could ever have is watching Thelma work."

Watching Schoonmaker work may also be the only way to understand what it is she does. "It's a wonderful job, but it's a little hard to describe," she said.

"You would have to sit here for two months with me and see how a scene has been transformed from the way it was originally cut and then how it looks at the end. What happens is that there are thousands of decisions I make every day. ... It's incredibly creative, because you're dealing not only with image but with sound, with acting, with lighting, with the camera moves, the director's intention."

Watching Schoonmaker at her mixing board is like seeing a virtuoso pianist command her instrument. "It's a Lightworks editing machine," she explained, "which is PC-based. It's not what most people use, which is an Avid. I was trained on this and I love it."

Or maybe Schoonmaker's more like an organist — the instrument she's playing is that much more imposing. The Lightworks has an array of controls — a keyboard, a wheel, various slide switches, a mouse — and Schoonmaker works them with an almost-balletic grace and physicality.

Long before she sits down to edit, she reads. "What I do with the script is usually read it whenever Marty tells me to," Schoonmaker said, "then put it away and I don't look at it again because my job really is to be a cold, objective eye for him. We look at dailies together, every night, of what he shot the day before. Then he talks to me constantly during that process. He's telling me what he thinks, constantly. 'I don't like that. I do like this. This is a better reading of that line.' Then I take those notes — I write like the wind, fortunately — and I take my own feelings and start creating selects. So I carve out all that raw footage. I carve out what's the best."

Schoonmaker estimated that about half her editing time is spent with Scorsese in the room.

"When he comes in after he's through shooting I have carved out the film for the first time, in a rough cut, and then we start working scene by scene, from the beginning, editing together. Then he'll go away and leave me alone for a while and then I'll work again and present another cut to him. We just keep going. On Departed, we had 15, which is a lot. We only had eight on The Aviator."

Schoonmaker has had the rare luxury among film editors of working with a single director — let alone one so gifted. "She seems to be totally in synch with Marty," Cocks said. "It's like musicians who've been playing together for 25 years. They can feel each other out and know where the piece is going before they get there."

Schoonmaker and Scorsese met during a summer film course at New York University in the mid-1960s. Born in Algeria, Schoonmaker grew up in Aruba (Schoonmaker's father worked for Standard Oil). She went to high school in suburban New Jersey. "If you weren't a cheerleader, you were nothing," Schoonmaker recalled.

Things were better at Cornell, where she studied Russian, in hopes of entering the Foreign Service. One of her professors was Vladimir Nabokov ("He had complete contempt for the students because he didn't think we knew enough Russian!"), and a fellow student was the novelist Thomas Pynchon.

Rejected by the US State Department, Schoonmaker moved to New York. "It was just the most wonderful time to be coming out of college: Pop Art, (Robert) Rauschenberg, (Jasper) Johns, (Jim) Dine," she recalled. "You'd go down to a Lower East Side storefront and Claes Oldenburg would be putting on a happening for 20 people."

Art didn't pay the bills, though, so Schoonmaker answered a classified ad to become an assistant film editor for a local television station. Her job was inserting commercials and truncating the running time of old movies. This led her to NYU, where she was able to show the nuts and bolts of filmmaking to Scorsese.

Schoonmaker began editing films. "It was such fun, the way we were sort of a band of apaches, making documentaries, then Marty's first feature, in New York City, without permits and not being in the union." She got her first Oscar nomination as one of the team of editors on Woodstock.

It took another decade for Schoonmaker to get into the film editors' union, just in time for Raging Bull. And it was then she met her future husband, Michael Powell, the director of such classic films as Black Narcissus and The Red Shoes. Although he was 35 years older, their relationship was by all accounts a true love match. They were together for just a decade before his death in 1990. But Schoonmaker's speaks of him with such vividness and affection it's as if he were simply away on a film shoot.

"He left me with a little furnace inside," she said. Schoonmaker is now editing Powell's diaries, preparing his letters for publication, and getting his archives ready for the British Film Institute. "I could spend the rest of my life doing stuff for him, and I love it — but I've got this wonderful job!"

Does Schoonmaker think she's getting better at that job?

"Oh yeah, no doubt about it," she said. "However, at a certain point I'm not going to be able to stay up all night, physically, for screenings and things. I'd like to die in the traces if I could. Did you ever see Last Tycoon? There's a wonderful thing where the editor died quietly during the screening." Schoonmaker laughed. "I think I'd rather die in the editing room. Just find me in the morning, about to make a cut."