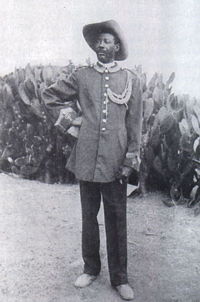 Samuel Maharero
At the end of April 1904, Samuel Maharero, leading of the Hereros, had been winning against the Germans. He decided to move his people and cattle from the Onjati hills north to Waterberg as the cattle needed fodder and Waterberg was farther from the railroad which would be a disadvantage to the Germans. As things were not going well for the Germans, the General Staff decided to replace Major Theodor Leutwein, the German governor, with General von Trotha who had won a reputation for ferocity in German East Africa a decade before.

From The Revolt of the Hereros by Jon M. Bridgman:

In entrusting von Trotha with the task, the emperor was careful not to limit his freedom of action by any specific instruction or directives. "His Majesty the Emperor and King only said to me that he expected that I would crush the uprising with any means necessary and then inform him of the reasons for the uprising"; thus von Trotha explained his commission to Leutwein. "I know the tribes of Africa," he continued. "They are all alike. They only respond to force. It was and is my policy to use force with terrorism and even brutality. I shall annihilate the revolting tribes with streams of blood and streams of gold. Only after a complete uprooting will something emerge." [1]

On August 4, von Trotha issued his order for the coming battle [at Waterberg]. Its key sentence read: "I want to attack the enemy [...] simultaneously with all sections in order to annihilate him."

The Hereros were defeated at Waterberg and forced to retreat. It was during the ensuing pursuit by the Germans that the worst attrocities were committed.