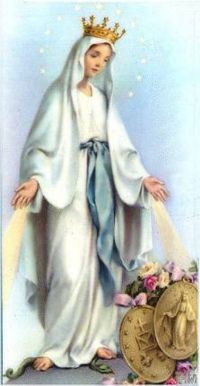 This is the standard image for Miraculous Medal prayer cards
"O Mary, conceived without sin, pray for us who have recourse to you."

The design was revealed by the Virgin Mary to St. Catherine Labouré on November 27, 1830 in the chapel of the convent of Daughters of Charity of St. Vincent de Paul on the rue de Bac, Paris. Catherine had been having visions for the seven months before and had told only her confessor M. Aladel who had the medal struck in June 1832. In 1836, a tribunal in Paris approved the medal as of supernatural origin. On one side, the medal depicts the Virgin Mary standing on a globe with her feet crushing a serpent's head. Beneath it says, "O Mary, conceived without sin, pray for us who have recourse to thee."

On the other side there is the letter M entwined with a bar with a cross on it. Twelve stars surround the symbols. Beneath are two hearts, one crowned with thorns, the other pierced with a sword. The medal gained in significance when Alphonse Ratisbonne, a Jew, was instantly converted to Catholicism while visiting a church in Rome to arrange a funeral. He subsequently founded the Order of Our Lady of Sion to work for understanding between Jews and Catholics.