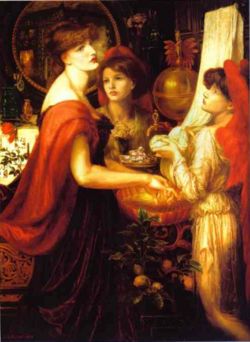 La Bella Mano, 1875
Our first impression of La Bella Mano is of a superabundance of “things,” crowded into a shallow space and even more compressed by the convex mirror’s reflection of a fire, shelves of silver and ceramics, and a canopied bed. Leaves, carvings, lace, feathers, flowers, jewels and gold are all richly colored and sensitively textured. But the visual center is the woman’s face, pale and lost in her response to something she sees or hears from beyond this exotic room, or maybe from within herself. Her two attendants are physically sensual in an androgynous way, but their wings identify them as supernatural creatures. They are a bridge between tangible and intangible worlds, as angel-figures usually are in art and mythology. They tell us that, despite the appearance of a Victorian boudoir, wherein a lady completes her toilette, probably in anticipation of the man who will join her, this is an other-worldly place. External experience, from water to fragrance to flickering light, coexists with the internal experience manifested in the woman’s expression.

La Bella Mano is typical of many Rossetti paintings of the last fifteen years of his life. Rossetti portrays a woman as the amalgam of the physical and spiritual aspects of love. As such, she is more than a woman, more even than the “ideal woman.” Like Beatrice, the poet Dante’s beloved, she is a complex symbol of the fusion of body and spirit, of the soul’s pilgrimage to God, of perfect love, of the soul itself. She exists suspended in time. Her features represent Rossetti’s concept of ideal beauty, perfected over several decades. Her symbolic role evolved from several sources, most notably from Rossetti’s immersion in Dante’s poetry and from his sympathy with the Romantic quest for the unattainable ideal.

Rossetti wrote a sonnet for La Bella Mano after he finished the painting:

O lovely hand, that thy sweet self dost lave
In that thy pure and proper element,
Whence erst the Lady of Love’s high advent
Was born, and endless fires sprang from the wave:-
Even as her Loves to her their offerings gave,
For the the jewelled gifts they bear, while each
Looks to those lips, of music-measured speech
The fount, and of more bliss than man may crave.
In royal wise ring-gift and bracelet-spann’d,
A flower of Venus’ own virginity,
Go shine among thy sisterly sweet band;
In maiden-minded converse delicately
Evermore white and soft; until thou be,
O hand! heart-handsel’d in a lover’s hand.

The sonnet is a typically Rossettian blend of individual and traditional mythology, full of contradictions and complements. The hand becomes a metaphor far the woman herself, whom Rossetti compares to “the Lady of Love...sprang from the wave,” meaning Venus, the Roman goddess of love and beauty, who came to earth from the sea. Through engravings, Rossetti knew Botticelli’s Birth of Venus, in which she stands in the incoming sea on a scalloped sea shell. His gold basin, a reference to Botticelli’s shell, is consistent with his admiration of Botticelli as one of the “pre-Raphael” painters for whom the 1848 Brotherhood named itself. Rossetti calls the attendants “Loves,” meaning Cupid(s), the winged god who was part of Venus’ retinue. They offer her precious gifts and await her music-like voice.

In mid-sonnet, unexpected language enters with a reference to Venus’ virginity, a state certainly not associated with her, although Christian iconography adapted many of Venus’ attributes to the Virgin Mary. The hand will remain pure until the lover’s hand takes possession of it. The word “handseled” refers to the giving of a token of luck, usually to the gift from bridegroom to bride. The meaning of the hand’s (or the woman’s) ultimate fate is left ambiguous: it will be fulfilled by its union and/or will lose its purity and beauty. New joy and innocence lost are inextricably tied. The tension established by the two states - sexuality and virginity, the body and the spirit - is left in place. The coexistence of these two states - peaceful or otherwise - prevails.

In the best tradition of Romanticism, the painting and the poem crystallize an idea rather than tell a story, La Bella Mano gives us not a logical argument but a state of mind. The work of art is a whole, a mysterious synthesis, not a series of easily-analyzed parts. But Rossetti does use certain artistic devices in his painting to create mood and to evoke an emotional reaction from us. The implied presence of music, or music-like speech, recalls the Romantic idea, expressed in England by Walter Pater, that of all the arts, music best expresses the ineffable. The trance-like attitudes of the three figures suggest reaction to a magical sound. This hypnotic aura, a kind of waking sleep, corresponds to the bed in the mirror and to the triple association of sleep, sex and death. A cloistered sensation comes partly from our awareness of the particularly enervating heat of a fireplace, here in close proximity to a bed. The implied physical sex act is brought into a psychic realm with a feeling of languorousness, a sense of arrested action. The androgyny of the attendants and to some extent of the woman, whose Amazonian massiveness, dark hair and exaggerated features go against the Victorian definition of beauty, is an old symbol of sexual completeness. The androgyne is the perfect confluence of the two sexes, who separately struggle for union. Rossetti’s own “language of flowers” is hen used not like Rate Greenaway’s, as a specific vocabulary of meanings, but to create a luxurious atmosphere of touch, fragrance and sight.