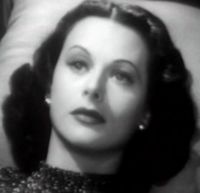 Hedy Lamarr in Dishonored Lady (1947)
Hedwig Vogelsang could be name-connected to the only other Hedwig I've ever heard of, Hedwig Eva Maria Kiesler (aka Hedy Lamarr]) (c.1913-2000). Before she emigrated to the United States in 1937, Hedy was, according to Hans-Joaquim Braun's article in the Spring 1997 issue of Invention & Technology, "an institution in Viennese society, entertaining — and dazzling — foreign leaders, including Hitler and Mussolini." In 1933 she "showed the world her acting skills and most of herself in the film Extase (Ecstasy), which quickly became notorious for its extensive nude scenes."

Not only was Hedy Lamarr a famous Hollywood movie star/glamour-girl in the 1940s, BUT, with her composer/second-husband George Antheil, she also invented and patented a device that controlled torpedoes by radio via "frequency hopping" whereby a signal is broadcast over a seemingly random series of radio frequencies, switching from frequency to frequency at split-second intervals."

In the late 1920s/early 1930s, George Antheil was one of Paris' top avant-garde composers, "writing and playing machinelike, 'mechanistic', rhythmically propulsive pieces [...] His Ballet Mécanique was scored for sixteen player pianos, xylophones, and percussion [...] but also had electric bells, airplane propellers, and a siren." (Braun, p.13)

This sounds very appealing. But how about this:

Hedwig is an old German name compounded from hadu, "battle", and wig, "fight."[1]. She could be a descendant of Heinrich Vogelsang (1862-1914) who in 1883 (at the age of 21) led the first Lüderitz expedition which led to the establishment of the colony of German South West Africa in 1884. When Pynchon did his research on German South West Africa, always alert for the letter V, he probably came across Vogelsang.