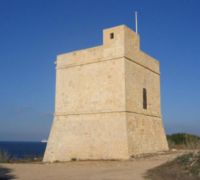 This notorious Malta murder took place on February 24, 1955. A bank teller/clerk, named Terreni, at a Valletta bank knew this guy, Anthony Aquilina, an employee with a flour company.

Aquilina used to deposit the company's monies at the Valletta bank where Terreni worked. On this occasion (of the murder), Terreni knew Aquilina was driving to Valletta to make the usual deposit. Somehow, Terreni talked him into driving to the Ghallis Tower area, a very isolated country area beneath Hal Gharghur.

Out there, Terreni killed Aquilina to rob him of the money he was going to deposit. He dumped his body in the Tower's well; over the body he dumped gypsum lime and the carcass of a goat to hide any trace of the human corpse. The murder was premeditated and well planned.

On March 9, 1955 some Civil Defense people were training in the area and the smell from the well led to the discovery of the body and eventually the murderer.

When my uncle Anthony (Toninu) Aquilina was murdered I was stationed in Singapore. As I was going out of the office to go home, I was handed a letter from my mother where it said that my uncle was very sick and he may not make it. Next letter I received said that he died...no murder was mentioned. When I returned to Malta on the way to England, I asked at my grandmother's house what happened and they did not want to talk about it so I remained in the dark for a while.

However I'll try to explain what I learned when I was in Malta. As far as I know my uncle did not drive, but I'm sure the company car took him there. Also, that the murderer Terreni, who worked at the bank, made arrangement to pick him up from the Palace in Valletta and take him to the bank. The people that were in the car (more than Terrani were involved) shot him. At one time some firemen were practicing at the tower and smelled a foul smell. My uncle was found in a well at Ghallis Tower and he still had the watch on his wrist, an indication that it was not a petty theft, but something greater.

One thing I knew then, that my uncle would never steal and run away with the money he was going to deposit. He was a good man and a good "induratur" as well. Before he got married, he was "superjur tal-Muzew" and he was made an overseer of the Valletta Muzew group. I'm sure that my uncle has forgiven Terrani...but as for myself I cannot forget but may God have mercy on Terrani's soul.

Yesterday, I was talking to my brother on the way to a funeral home (my son-in-law's funeral), and he told a different story, similar to mine but slightly different. He should know better because he was the one who had to identify the body. The only way he could identify my uncle was by the shoes. Uncle Tony used to ask my brother to wear Tony's new shoes to break them in. I suppose he had smaller feet. Anyways, uncle Toninu was of a good breed. He loved God and the family and all people. He was an example to all who had the pleasure of meeting him.