Does McClintic Sphere in V. stand for Thelonious Monk? 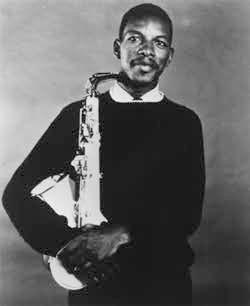 Wily coyote that he is in V.(1963), Thomas Pynchon adorns McClintic Sphere with a "hand-carved ivory saxophone," getting us to think Sphere is somehow a stand-in for jazz great Ornette Coleman. There was, in the civil-rights era of the '60s, much ado about Coleman's "new sound" and his "new" white plastic sax. Like Coleman's group, Sphere's group in V. features "no piano," plays music vaguely expressive of "African nationalism," but (the narrator tells us) Sphere is wrongly viewed as a "kind of reincarnation" of Bird (Charlie Parker). A minor figure who drifts in and out of the narrative of V., Sphere is often led by Paola Maijstral's maieutic (O.E.D.; maieutic = Socratic) intellectual midwifery, through some laborious dialogue, until he delivers what has come to be taken as the novel's motto: "Keep cool, but care." (V.; 366) To whom does he speak? For whom does he speak? To properly answer these questions, we should figure out who he is.

Arguably the musician McClintic Sphere most recalls is another esteemed figure in jazz history, pianist Thelonious Monk. I've demonstrated elsewhere that one of Pynchon's favorite methods of allusion is to use a half name of a famous person with a humorous connecting name; Wendell "Mucho" Maas, Clayton "Bloody" Chiclitz, for but two examples. In The Crying of Lot 49, Pynchon means for us to summon political figures Wendell Willkie and Henry De Lamar Clayton, on the subtextual level. Also in Lot 49, Pynchon half-names "Secretaries James and Foster and Senator Joseph," and similarly means for us to decrypt them as Secretary of Defense James V. Forrestal, Secretary of State John Foster Dulles, and Senator Joseph R. McCarthy. By naming his jazzman McClintic Sphere, Pynchon signifies he wants us to decode to Thelonious Sphere Monk in the subtext. If for Gertrude Stein, "a rose is a rose is a rose"; for Pynchon, a Sphere is a Sphere.

Thomas Fitterling, in Thelonious Monk: His Life and Music (1997), points out that Monk's middle name, "Sphere," derives from his maternal grandmother, Sphere Batts. Not a hipster's cool affectation, "Sphere" was part of Monk's given name according to family documents. Monk didn't learn his middle name until the 1940s, when those documents made their way from North Carolina to New York, and: "From then on he used it as a hip accessory. He would joke that owing to his middle name he could never be called a 'square'." (Fitterling, 20.)

Another telltale touch is Pynchon's use of disguises and aliases in the text, like the various identities Slothrop dons during Gravity's Rainbow. Slothrop poses as British correspondent Ian Scuffling, and as a nameless Russian soldier; he masquerades as a pig, becomes known as Rocketman, Raketemensch, and finally Rocky. "Ruby" is the alias Pynchon gives the disguised Paola Maijstral while she is entertaining and instructing Sphere. Not coincidentally, one signature tune in the Monk oeuvre is titled, "Ruby, My Dear."

In Thelonious & The Baroness Fitterling documents the widely known and long-standing relationship between Thelonious Sphere Monk and the Baroness Kathleen Annie Pannonica de Koenigswarter, called "Nica" for short. They were often seen together in public. Monk wrote songs using her name or that of her apartment building, The Bolivar, in the titles; "Pannonica", and "Ba-lue Bolivar Ba-lues-are". Being born into the English line of the Rothschild family, growing up in Paris, and attending a strict religious boarding school, seem to have stimulated some rebellious streak in Nica. Being free of the usual financial concerns allowed Nica to express her discomfort with traditional women's roles. She became an aviator, a then-glamorous and adventurous calling in the era of Amelia Earhart, "America's First Lady of the Air." Soon she married fellow pilot Jules de Koenigswarter, a French diplomat and later resistance fighter. During World War II, Nica went on various missions for De Gaulle, which was not surprising if one knew her brother served as Churchill's courier to the White House. (Fitterling, 54) No ordinary woman, in the middle 1950s Nica chose to become Monk's mistress and muse. In 1982 Monk died in the arms of his wife Nellie, at Nica's New Jersey estate.

What, one might ask, does this have to do with Pynchon scholarship? It is an early example of Pynchon's indicative naming. As a literary ironist, Pynchon was likely drawn to Monk as an extraordinary musician, a humorist, and a musical ironist (as Ronald Gray so ably demonstrates in his article "Something in Blue-Thelonious Monk and Henry Adams," on The Thelonious Monk Website: ). Probably Pynchon recognized and appreciated Monk's use of irony. But Dizzy Gillespie obviously had a humorous, ironic way about his music and his on-stage persona. Why then did Pynchon choose Monk, not another, say Dizzy, on which to pattern his jazzman? Pynchon chose Monk because his well-known affair with Nica, The Baroness, suited his literary purpose.

First, indicative naming is the use of a half-name where a fictional character leads us to a real historical person. Second, the textual reference leads to something extra-textual that is important for understanding the work at hand - what I term Pynchon's misdirection. Finally, this misdirection leads to a historical situation - though never mentioning it in the text.

In this case, McClintic Sphere leads us to Thelonious Sphere Monk, and Monk leads us to Baroness Nica de Koenigswarter and her life. There are some notable parallels between Nica and the woman Stencil knows as V., who started her career with "'...a young crude Mata Hari act.'" (V.; 386) Stencil remembers that somewhere along the line V. "'stole an airplane: an old Spad...God what a flight it must have been: from le Havre over the Bay of Biscay to somewhere in the back country of Spain.'" (V.; 387) Not that V. is Nica in any roman a clef sense: she is not. But the resonances are powerful at the level of the subtext. Nica is a Rothschild whose life reflects the issues Pynchon wants us to attend in V.: disinheritance, old dynasty vs. new dynasty, secret agents and couriers, plots and counter-plots, "The Big One, the century's master cabal," and "the ultimate Plot Which Has No Name," (V.; 226) and the effect of World War II on the old-money crowd.

If McClintic Sphere somehow allusively stands for Monk, who connects to The Baroness, then Pynchon has him speaking for the victims, the noble remnant of the old dynasty (J.P. Morgan, The Rothschilds, etc.); and has him speaking to those who view themselves as the disinherited, the preterite, the passed-over in American society.

We see, then, that McClintic Sphere is not a one-to-one stand-in for Ornette Coleman, and how and why Pynchon means Sphere to signify Thelonious Monk and his mistress, the Baroness. We see how Pynchon's use of irony and camouflage will mislead readers lacking the trained, or magic, eye.