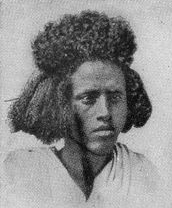 Hadendoa Warrior
"Fuzzy Wuzzy" was the term used by British colonial soldiers for the nineteenth century Hadendoa warriors supporting the Sudanese Mahdi. The Hadendoa an East African nomadic tribe. They, like the Bisharin and Ababda, belong to the Beja people. The area inhabited by the Hadendoa is today parts of Sudan, Egypt, and Eritrea. The language of the Hadendoa is a dialect of Bedawi, a Cushitic Afro-Asiatic language. Arabic is also spoken among the Hadendoa. Sunni Islam is the religion of the Hadendoa.

The Hadendoa are traditionally a pastoral people, ruled by a hereditary chief who, in colonial times, was directly responsible to the Anglo-Egyptian Sudan government. Osman Digna, one of the best-known chiefs during the Mahdia, was a Hadendoa, and the tribe contributed some of the fiercest of the dervish warriors in the wars of 1883-1898. So determined were they in their opposition to the Anglo-Egyptian forces that the name Hadendoa grew to be nearly synonymous with rebel. This, however, was the result of Egyptian misgovernment rather than religious enthusiasm, as the Hadendoa of the time were true Beja, and Muslims only in name. Their elaborate hairdressing gained them the name of Fuzzy-wuzzies among the British troops (this was likely the inspiration for Rudyard Kipling's poem, "Fuzzy Wuzzy".) They earned an unenviable reputation during the wars by their hideous mutilations of the dead on the battlefields. After the reconquest of the Egyptian Sudan (1896-1898) the Hadendoa accepted the new order without demur.

We've fought with many men acrost the seas,
An' some of 'em was brave an' some was not
The Paythan an' the Zulu an' Burmese;
But the Fuzzy was the finest o' the lot.
We never got a ha'porth's change of 'im
'E squatted in the scrub an' 'ocked our 'orses,
'E cut our sentries up at Suakim,
An' 'e played the cat an' banjo with our forces.


So 'ere's to you, Fuzzy-Wuzzy, at your 'ome in the Soudan;
You're a pore benighted 'eathen but a first-class fightin' man;
We gives you your certificate, an' if you want it signed
We'll come an' 'ave a romp with you whenever you're inclined.

We took our chanst among the Khyber 'ills,
The Boers knocked us silly at a mile,
The Burman give us Irriwaddy chills,
An' a Zulu impi dished us up in style

But all we ever got from such as they
Was pop to what the Fuzzy made us swaller;
We 'eld our bloomin' own, the papers say,
But man for man the Fuzzy knocked us 'oller.
Then 'ere's to you, Fuzzy-Wuzzy, an' the missis and the kid;
Our orders was to break you, an' of course we went an' did.
We sloshed you with Martinis, an' it wasn't 'ardly fair;
But for all the odds agin' you, Fuzzy-Wuz, you broke the square.

'E 'asn't got no papers of 'is own,
'E 'asn't got no medals nor rewards,
So we must certify the skill 'e's shown
In usin' of 'is long two-'anded swords
When 'e's 'oppin' in an' out among the bush
With 'is coffin-'eaded shield an' shovel-spear,
An 'appy day with Fuzzy on the rush
Will last an 'ealthy Tommy for a year.
So 'ere's to you, Fuzzy-Wuzzy, an' your friends which are no more,

If we 'adn't lost some messmates we would 'elp you to deplore;
But give an' take's the gospel, an' we'll call the bargain fair,
For if you 'ave lost more than us, you crumpled up the square!

'E's a injia-rubber idiot on the spree,
'E's the on'y thing that doesn't give a damn
For a Regiment o' British Infantree!
So 'ere's to you, Fuzzy-Wuzzy, at your 'ome in the Soudan;
You're a pore benighted 'eathen but a first-class fightin' man;
An' 'ere's to you, Fuzzy-Wuzzy, with your 'ayrick 'ead of 'air —
You big black boundin' beggar — for you broke a British square!